I would expect anyone who wanted to challenge the Ghent catalogue description of the painting as The Peace of Cambrai might question whether the clothes beings worn by the 15 figures were authentic to the first half of the 16th century. In fact there was very little dissent then or subsequently about the clothing's fitness to the period. But there are some puzzling aspects of the clothing which are worth mentioning here.

1. What is the significance of the various hats being worn, a few red including Charles V's but mostly black?

2. In the presence of royalty one would expect hats to be taken off and not worn half raised.

3. Am I right in supposing that the gold embroidery in the right arm of the character in the left arch indicates royalty, in this case the Dauphin son of Francis I.

4. Why has the artist/s painted the red cloak so as to reveal the garter worn by the figure in red unless it is to help identify Charles V. (Henry VIII had awarded Charles the Order of the Garter). I suspect that Charles is also wearing the Garter Surcoat.

5. What is the significance of the cowls or hoods worn by the three women? They are extraordinary with their 'tails' falling beneath the waist. I searched more diligently for them than any other item of clothing including Helyot's massive book on clerical dress but I never found them.

» Go to next section: Who are the figures? (The Figures)

What is the scene being depicted?

In 1999 there came a break through. The painting was accepted for inclusion in the Charles V quincentenary exhibition in Ghent in 2000 and was included in the catalogue with a good photo and description by the curator Ann Delva who wrote "The owner bought the panel indirectly from Sotheby's who refused to divulge the name of the Seller. 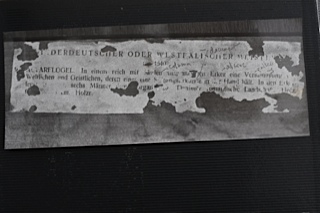 Fragment from 1934 Lepke catalogue glued to back of panel

Stuck to the back of the panel was a catalogue fragment in German which Sothebys translated as 'Figures' in a classical interior a gentleman in disputation with other figures to the left, a cleric flanked by other figures and extensive landscape with fantastic edifices beyond.

The scene depicted is The Ladies Peace 1529. Francis I kept prisoner in Madrid after the battle of Pavia would be returned to France on condition that his two sons took his place and that Charles would be given the Duchy of Burgundy. Francis at first seemed to agree but once back in France he declared that there was no question of giving to Charles the Duchy. He would not obey the Treaty of Madrid since he was forced to sign under compulsion and not of his own free will. Charles felt abused.

The painting thus represents Francis his two feet imprisoned in the Octagon with Charles' leg blocking him from coming out. Their facial features make the two sovereigns easily recognisable. The tall stature and elegant appearance of Francis with Charles showing a strong Hapsburg chin.

The group of women on the right faintly painted are the reconcilers who had come to Cambrai in 1529. Louise of Savoy mother of Francis and Regent of France during his imprisonment in Spain and Marguerite of Austria aunt of Charles and Regent of the Low Countries. The two women were sisters in law because Louise was the sister of Philibert of Savoy the deceased husband of Marguerite. The third woman is Eleanor of Austria widow of the King of Portugal and sister of Charles V who at the Treaty of Madrid had been demanded in marriage by Francis and married him eventually in 1530.

In the central foreground is a member of the clergy in black holding in his hand the scroll of the treaty.

In my opinion the painting emphasises the treaty. Charles's finger pointed at Francis gives a warning to him to observe the treaty's terms. It is possible that the man in black is J.Carondelet who used to be a secretary of Charles. In the left arch the two persons dressed in not grand clothes are the children of Francis first. The other people in the painting are without doubt personalities in the entourage of Charles. Some of them resemble people painted by Gossart as for example Adolphe of Bourgogne with the large beard and hat. One finds similar portraits in the 'Recueil d'Arras'".


Please submit your comments below...